The Lake County Watershed Protection District (District), formerly known as the Lake County Flood Control and Water Conservation District, operates and maintains the Middle Creek Flood Control Project (Project) in Upper Lake. The project consists of a system of 14.4 miles of levees, a pump station and a diversion channel to divert Clover Creek overflow around the town of Upper Lake; view the Middle Creek Flood Control Project Map (PDF). The upper portion of the project protects the community of Upper Lake from flooding by Middle Creek and Clover Creek. The lower portion of the system protects farmland and some residences from inundation by Clear Lake.

The efforts to control flooding in the Upper Lake area date from the early part of this century. Levees to reclaim lakebed for agricultural use date from around the 1920s in the area commonly known as the Reclamation Area. Efforts to protect the community of Upper Lake began in 1954 with Congress authorizing a federal flood control project. It is known as the Middle Creek Flood Control Project. The Corps of Engineers constructed the project starting in 1958. The levees upstream of the Middle-Scotts Creek confluence were constructed between 1959 and 1961 in substantial accordance with the design plans. After several failures in the construction of the levees in the Reclamation Area and application of some emergency measures during construction, the project was completed in 1966. The completed levees were not in accordance with normally accepted engineering standards at the time. The State conditionally accepted the levees in the Reclamation Area into the project. 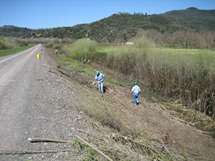 In 1960, the Lake County Flood Control and Water Conservation District and the State Reclamation Board entered into an agreement to provide routine maintenance, flood fighting and levee patrolling. Maintenance of the creek channel improvements was performed by the State until 1996. In April of 1996 DWR informed the District that they would no longer maintain the channel improvements and Clover Creek in accordance with the 1960 agreement.

In 1999, a vote was held to create a Special Benefit Assessment to pay full cost of the operation and maintenance (O&M) of the Project. There were two benefit zones:

The levees and channels in the Upper Basin are maintained by the District. O&M activities include:

The Reclamation Area (MA-17) has been proposed to be restored to a functional part of Clear Lake through the Middle Creek Flood Damage Reduction and Ecosystem Restoration Project. An overview of the Restoration Project is available on the Middle Creek Restoration page. The District has begun property acquisition utilizing Flood Protection Corridor Program (FPCP) grant funds from the CDWR to acquire property. A description of the FPCP project and status report is available on the Flood Protection Corridor page.

Through awarded funds from the California Department of Water Resources' Small Communities Flood Risk Reduction (SCFRR) Program. Lake County is conducting a study to identify flood risk reduction solutions for the community of Upper Lake. The Project objectives include assessing the community's existing flood hazards, evaluating structural, non-structural and multi-benefit projects, and making recommendations to implement a flood risk protection project that integrates other resources' needs, as much as feasible.

Public Meetings took place on Monday, December 6, 2021 and Tuesday, December 7, 2021 where an overview of the Project was discussed and community input was gathered. View the Presentation Recording on YouTube.